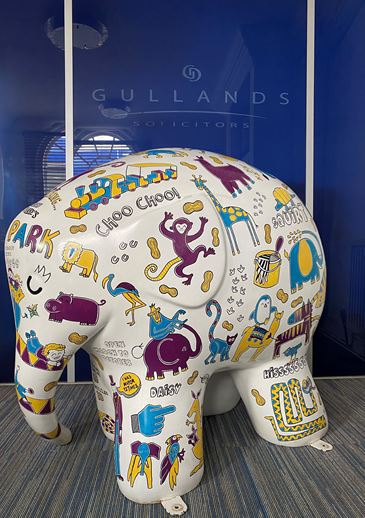 Elmer’s Big Heart of Kent Parade has been a huge success for Maidstone and the Heart of Kent Hospice this summer, and the auction of elephants to conclude the trail raised a staggering £312,750.

Blair Gulland from Gullands Solicitors successfully bid for one of the large elephants – ‘Zoo Park Shenanigans’ by The Brown Studio, which will now take pride of place at Gullands’ offices in Mill Street and go out and about with them at events such as the Weald of Kent Ploughing Match (18 September 2021).

What is the history and inspiration behind ‘Zoo Park Shenanigans’?

The hand drawn design of different animals for this Elmer was by husband and wife team, Hayden and Vanessa, commemorating the fascinating history of Maidstone Zoo between 1949-1959.

The design reflects the fun and colourful shenanigans that went on at the zoo, including the infamous elephants, Gert and Daisy. There were over 250 species at the zoo, but only the Elephant House remains at Cobtree Manor Park today.

Cobtree Manor Park is located at the foot of the North Downs and was first recorded in 1596, part of the estate of Sir Thomas Wyatt.

The land was farmed throughout the 17th and 18th centuries and was immortalised by Charles Dickens in The Pickwick Papers. Its then owner Mr William Spong is believed to been Dickens’ inspiration for Mr Wardle of the Manor Farm near Dingley Dell.

During the 19th century the local landscape around the farm would have consisted of fields, orchards and woodland and old cherry, apple and pear trees still stand in the park.

In 1896, Cobtree House was leased by Hugh William Tyrwhitt-Drake who went on to buy the house and 300 acres of surrounding land in 1904 and he also leased an additional 174 acres. The estate was significant in size and included 15 cottages, a sand quarry, riverside wharf, brick and tile works and sporting rights to 228 acres. Following his death in 1908, the estate passed to his son Garrard (later Sir Garrard ) and it was his private collection of animals which formed Maidstone Zoo, which was opened in 1934 by the famous circus owner Bertram Mills.

By 1939, animals included bears, camel, cheetah, chimpanzee, deer, kangaroos, lions, llama, yak, zebra, wolves and of course elephants as well as birds, fish and reptiles. The Zoo remained open throughout the war and visited in 1946 by Princess Elizabeth.

Sir Garrard and his wife Lady Edna had no children of their own, so set up the Cobtree Charity Trust in 1951. Cobtree Manor Park was created in the late 1970’s and a major programme of tree planting began.

The Park is now leased to Maidstone Borough Council and facilities were undated in the last decade to include is a zoo-themed play area, sculpture trail, picnic area, visitor centre and café.

Sir Garrard Tyrwhitt-Drake leaves a lasting legacy on the town far beyond his death in 1964. He was for many years a prominent businessman; the Mayor of Maidstone 12 times and he served the borough council for 48 years. He was a freeman of the borough and was knighted for his services to politics and public services in the country. He was appointed a Deputy Lieutenant in 1945 and High Sheriff of Kent  1956-57.

Sir Garrard was also a major benefactor to Maidstone and established the carriage museum which bears his name (coincidentally where the Gullands’ sponsored Steam Elmer resided for the duration of the parade) and he donated the buildings of the College of All Saints.

Blair Gulland comments: “Sir Garrard was completely committed to promoting the interests of Maidstone and Kent and he made a major impact during his years serving the council and of course left a legacy which we all still benefit from today. I’m delighted to have successfully bid on such a well-connected and historical Elmer Elephant for Gullands and in the process to help the Heart of Kent Hospice raise funds to continue their fantastic work locally. I’m sure Sir Garrard would have been delighted with Elmer’s Big Heart of Kent Parade and what it has achieved this summer and we are thrilled to have been a part of it.”