The history of Maidstones stag 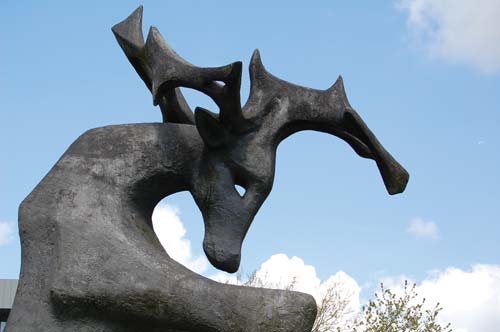 The statue once described as “a dramatic, rampant stag, rearing up on its hind legs, full of masculine raw energy” is well-known by all Maidstone residents and locals, but less well known is where it came from.

The Stag was sculptor Edward Bainbridge Copnall’s largest piece of work and for it he was awarded a silver medal from the Royal Society of British Sculptors.  After its creation in 1963, the statue was put on display and unveiled by Princess Alexandra in London at Stag Place near Victoria Station where it remained until the area was redeveloped in 1997.

Originally donated to Sevenoaks Borough Council in December 2000 by Edward’s daughter Jill Neff, the Stag was eventually sold to Maidstone Borough Council in late 2003 for £2,000 after it was decided that Sevenoaks could not provide a suitable permanent home for the one-and-a-half ton solid aluminum piece of artwork.  This provoked much protest and anger from many Sevenoaks residents who believed the sculpture to be worth at least £250,000 at the time.

Today the 21-feet-tall Stag proudly towers outside the Lockmeadow Centre where it was unveiled as part of the Kent Millennium River Park development in 2004.