The healing (and fundraising) power of cycling

The healing (and fundraising) power of cycling

Help for Heroes’ largest individual fundraiser Steve Craddock who has raised over £500k for the charity takes to his bike once again for Cycle4Heroes on Saturday 25 June (also Armed Forces Day) and here at Gullands we are delighted to be sponsoring the event. 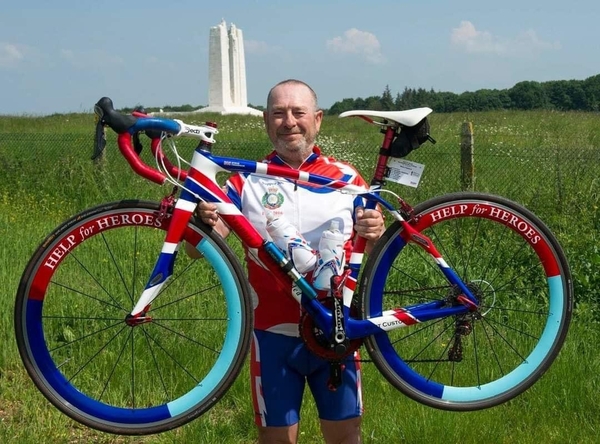 As well as raising money Steve has also helped in raising awareness of the ongoing struggles which many former service personnel face. Steve comments: “I’ve raised a lot of money over the last few years but it is a drop in the ocean as to what the charity needs to operate each year. It is important to raise awareness and if everyone gave just a couple of quid it would make a massive difference.”

Charities haven’t had the same visibility and opportunities over the last couple of years due to Covid and many are struggling. Steve continues: “It’s been really frustrating not being able to get out and do what I do which is to get on my bike and encourage others to ride for the charity and get around the country and talk to people about Help for Heroes work. Just because the guns have fallen silent for many former soldiers it doesn’t mean the pain has gone away and they wake up every morning having to deal with the issues they face.”

As a former sapper in the Royal Engineers, Steve is all too aware of the issues many face each day and he has post-traumatic stress disorder from his own military service and deals with his own battles. Cycling and raising money for charity has been one of the ways he has helped to deal with this. Steve explains: “Seeing people whose lives have been blasted apart and seeing how they have benefited from the services Help for Heroes provides has helped me, as I know I’ve been a part of the fundraising, I’ve done my bit. With mental health issues you don’t feel good about yourself but selfishly helping others has actually helped me as it means I don’t have to focus on my own issues or what my problems are. I still have issues – just recently it has been the 40th anniversary of the Falklands War and a pal of mine was killed serving on RFA Sir Galahad which sank during the conflict. That was difficult, there was a memorial for him and it brought back a lot of memories.”

Steve has embraced the ability to get back into the saddle following the pandemic having recently ridden across Sri Lanka and also this month he has taken part in the Big Battle Field ride across northern France.

By comparison to these, Cycle4heroes ride is a more genteel one day ride where no one is left behind. “The ride sets off from the Royal Engineers Museum in Chatham and we will head out towards Faversham before returning and finishing again in Chatham after covering about 75km. When we finish we will ride in as a peloton into the Armed Forces Day celebrations at Great Lines Park in Chatham – a free and fun day out for all the family. This is a ride not a race and it is fully supported and no one is left behind and we look forward to raising awareness, raising money and having a great day on our bikes enjoying the Kent countryside. It would be a great ride for anyone new to cycling or for someone who wants a friendly bunch to ride alongside.”

And if you are new to cycling then just remember everyone was in that position once and everyone has to start somewhere. Steve concludes: “When I started cycling I was 19stone in weight and at only 5ft 6, I wasn’t in good shape. I saw the lads who had been injured and they were cycling or using the hand bikes and I thought if they can do it I can and I also thought back to when I was in the army and how fit I was so I bought a bike and started to have a go. It was hard and I wasn’t a pretty sight in lycra, but I did it. On the Big Battle Field ride on my second year I was following a triple amputee up a challenging hill and he had blood coming from his prosthetic hand due to the effort he was putting in and I thought to myself just get a grip and get on with it. You’ve got arms and legs, you can get up this hill so I had to keep going. Life is like that there will be obstacles you have to face, both physical and mental but you have to keep going.”

For more details about the fundraising or to join in with cycle 4 heroes, visit www.cycle4heroes.com