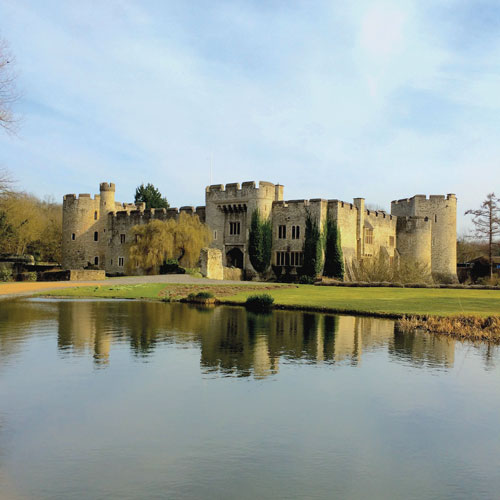 Magna Carta was born from a long and tedious process of negotiations between King John and a group of rebellious barons led by Robert Fitzwalter, Lord of Dunmow.

After King John’s attempts to increase taxes to fund an unsuccessful invasion of Normandy, which had been claimed by the French in 1204, opposition to the Monarch was mounting.  Resistance originating from the North quickly spread to East Anglia and in October 1214 a rebel coalition met at Bury St Edmunds.  By January 1215 the rebels had formed an official confederacy and three months later they renounced their faithfulness to the King and effectively declared war on the Monarch.

King John was forced into negotiation in May 1215, and after two weeks of intense debate overseen and mediated by the Archbishop of Canterbury, Stephen Langton, Magna Carta was created.  By 10 June an agreement had been roughly drafted under the ‘Articles of the Baron’ but it took a further five days of bargaining for the final terms to be agreed.  Copies of the Charter were signed at Runnymede and distributed to the shires with the barons then renewing their loyalty to the Monarchy on 19 June.

The Charter essentially offered a set of remedies to prevent King John from misrule and the majority of clauses concentrated on issues of the era and focused heavily on feudalism.  Consequently many of Magna Carta’s clauses have no place in today’s society – and yet, it is still considered to be one of the most influential documents in English history.

The lasting fame of Magna Carta is owing to the clauses dealing with the dispensation of justice, which led to the principles of equal treatment under the law and the idea that royalty was subject to the same rules as everyone else and was no longer above the law.  Under clause 39, no free man could be arrested or imprisoned except by lawful judgement of his peers or by the laws of the land and clause 40 ensured that justice could not be sold, delayed or denied.

The Faversham Magna Carta has been in the town since 1300 and is the last reissue of King Edward I’s seal, which is believed to be the last time the Great Charter was reissued.  It was presented to the Barons of the Port of Faversham due to the town’s connections with the Cinque Ports, which were given special status for their role in defending the country’s coast from invasion.  Only six 1300 Magna Carta documents survive and the other five can be found in Oriel College, Oxford,  The Bodleian Library, Durham Cathedral, Westminster Abbey, and the City of London.  Magna Carta is one of many charters awarded to Faversham by kings and consequently its historical importance was initially overlooked.  Guests attending the Allington Castle debate will have a unique opportunity to view the Faversham Magna Carta.

The Rt Hon. the Lord Liddle
Lord Roger John Liddle is a British political adviser and consultant principally known for being Special Adviser on European matters to Prime Minister Tony Blair and President of the European Commission, José Manuel Barroso. He also worked together with Peter Mandelson on books outlining the political philosophy of the Labour Party under Blair’s leadership.  He is chairperson of the international think tank Policy Network and Pro-Chancellor of the University of Lancaster.

The Rt Hon. the Lord Howard of Lympne CH QC
Lord Michael Howard of Lympne, CH, PC, QC is a British politician who served as the Leader of the Conservative Party and Leader of the Opposition from November 2003 to December 2005.  He had previously held cabinet positions in the Governments of Margaret Thatcher and John Major, including Secretary of State for Employment, Secretary of State for the Environment and Home Secretary.