We are delighted to be sponsoring the Taste of Kent Awards 2020 Kent Food Business of the Year, an award for businesses based in Kent, that make a range of food product(s) using ingredients sourced from Kent where possible, which are available at multiple outlets.

As you read this the shortlisted top three in each category will have been announced and will progress through to the next round of judging, before the winners are announced at the Taste of Kent Awards Gala dinner, which takes place on 5 March 2020 at the Kent Event Centre.

The Gullands team attended the prize giving for the Weald of Kent Ploughing Match and Kent Hop Competition in November and Kent’s Best Hop Grower of the year judged as part of  The Taste of Kent Awards 2020, was named as Tim Day of GM Day & Sons, from East Peckham, Kent with the variety Progress.

Tim was chosen from the Kent hop growers who entered the Kent Hop Competition, which is organised by The Weald of Kent Ploughing Match and sponsored by BTF Partnership and Shepherd Neame.

Hop growing in Kent is seeing a revival thanks to the interest in micro brewing and craft beers and Kent is famous for its Hop growing heritage.  Whilst there is now a smaller number of growers in the county, they grow hops to a very high standard which are in demand from brewers across the world.

Stuart Highwood, head judge commented: “This year was a very good show with a very high standard of hops as it has been such a good growing year.  Despite some growers being affected by high winds in August which caused some damage to the crop, the hop cone sizes were variable which is good for brewing.  The continental flavours preferred for the modern craft beers are increasingly popular and hop growers should be looking forwards, as brewers are looking for more interesting varieties of hops to use in beer making.  That said the variety Progress which Tim has won with is a traditional fuggle type hop used in making bitter.” 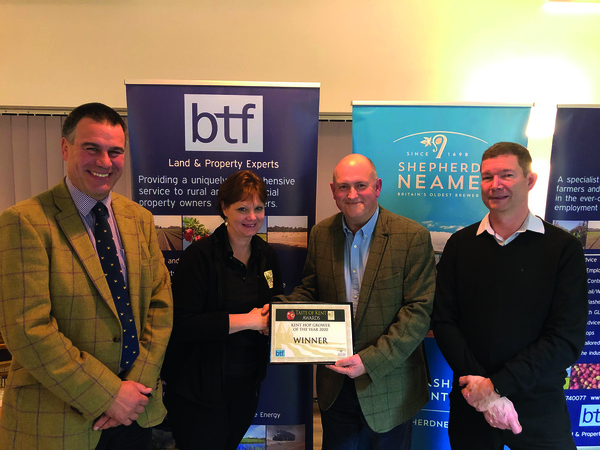