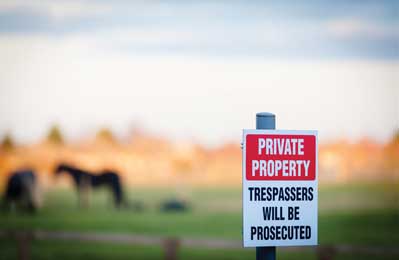 Adverse possession (more commonly known as “squatters’ rights”) is the way in which rights of ownership over land can be obtained without the legal owner’s agreement.  Sounds unfair?  It depends…

If you are a legal owner, you obviously would not wish to receive a letter from the Land Registry stating that they have received an application for adverse possession of your land by someone who has been occupying it without your permission.

As a landowner, you should consider inspecting your land or property frequently to make sure that nobody is squatting on it.  If you receive notification from the Land Registry that someone has made an application for adverse possession of land that you own, you must act fast and seek legal advice as to the necessary steps to preserve your ownership.

However, you may actually be that person who has been in occupation of someone else’s land, perhaps looking after it for many years, wishing to make an application for adverse possession of the land which has been neglected by the legal owner.

Currently, to make a claim for adverse possession, you would need to show that you have had a “sufficient degree of physical custody and control” of the land for a period of at least 10 years.  This may be demonstrated by enclosing land by a fence or wall, by changing locks on a property
to prevent others from gaining access to it, or otherwise generally exercising rights of ownership of the land without the consent of the landowner.

There have been heated debates as to whether the law relating to adverse possession is actually fair.  The European Convention on Human Rights states that “every person is entitled to the peaceful enjoyment of his possessions”.  Clearly, that enjoyment would be lost if you lose rights to your own land! Nevertheless, both the European Court and the Court of Appeal have held that the doctrine of adverse possession complies with human rights.

Landowners will be relieved to note that the current legislation (Land Registration Act 2002) recognised the unfairness to land owners and introduced new rules that are very much weighted in favour of the landowner and against the person seeking adverse possession, especially when the land is registered at the Land Registry.

There are always two sides of the same coin.  Whether you are the landowner wishing to defend a claim of adverse possession of your land, or whether you want to make a claim for adverse possession, Gullands have the expertise and experience to assist you.

For more information, Marta Konieczna is a Trainee Solicitor in the Residential Conveyancing Department and can be reached at m.konieczna@gullands.com.