We are deeply saddened by the news of the death of Her Majesty Queen Elizabeth II and one of our team, partner Catherine Lloyd, Under Sheriff of Kent has had a formal role in proceedings locally. We asked Catherine to explain her role and how she felt on such a momentous occasion.

In accordance with long-held traditions, there would then follow public readings of the Proclamation across the cities and towns of the United Kingdom to ensure local communities were informed.

Accordingly, this year's High Sheriff, Russell Race DL, found himself in the sad position that no High Sheriff wants to find themselves in. It now fell to him to read the Proclamation in the county town of Maidstone.

As the Under Sheriff of Kent, it is my role to support the High Sheriff in this, unquestionably the most difficult role of their office, and - should the High Sheriff be unavailable to read the Proclamation - to discharge that sombre duty myself on their behalf. Despite living in the age of social media, the old traditions are still followed; this one 70 years on from when it was last undertaken.

The shock and sadness of learning of Her late Majesty's passing therefore had a personal significance of knowing there was a job to be done and, like her Majesty had always done - needing to do it well. Inevitably, whilst chatting to dignitaries from across the county, including borough and district mayors, members, and officers of Kent County Council as they gathered in Maidstone Town Hall, I was constantly scanning the room for my High Sheriff.

I need not have worried. With tireless support from the Lord Lieutenant's office at Kent County Council, shortly before 1 pm on Sunday 11 September, the High Sheriff, led by the Lord Lieutenant, took to the podium outside Maidstone Town Hall in front of the waiting crowds. He was followed by civic dignitaries, the Bishop of Rochester, Chief Constable of Kent Police, Helen Grant MP and a very relieved Under Sheriff.

Under a bright sky and before a hushed crowd, he read the Proclamation with a sombre dignity that reflected the mood of those gathered. As the words of the Proclamation rang out, all of us present felt a collective unity in giving thanks for Her late Majesty's life of devoted service whilst also looking to the future of the new reign of King Charles III. Following a rendition of God Save the King, the borough and district mayors stepped forward to receive a copy of the Proclamation from the High Sheriff with instructions to depart and announce it in the towns across the county.

And so, the traditions continue. Whilst I will not have the honour of serving 70 more High Sheriffs before this tradition has to be repeated, today we can nevertheless say "God Save the King" and wish him a long and happy reign over us.”

You can watch the reading of the Proclamation in Maidstone here https://www.kentonline.co.uk/maidstone/news/crowds-cheer-god-save-the-king-as-charles-proclaimed-in-ke-273352/ 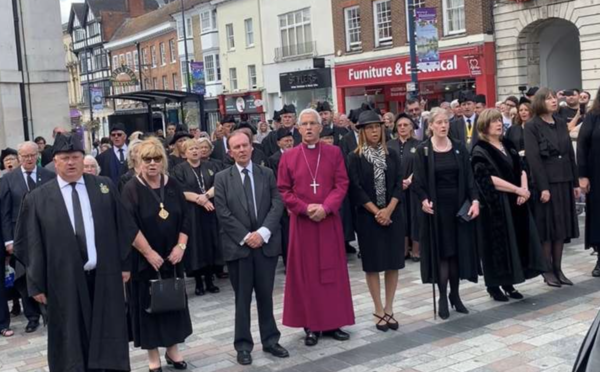 Catherine Lloyd pictured third from the right at the Proclamation Service in Maidstone, pic by The KM Group.