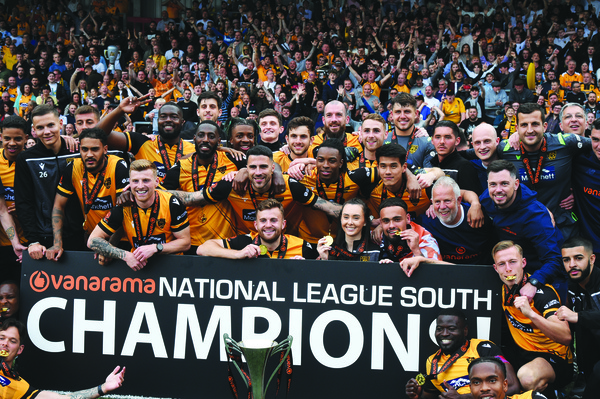 For the second time in seven years, Maidstone United has been crowned The Vanarama National League South Champions and here at Gullands, we have been delighted to be supporting them at their home at the Gallagher Stadium for the last ten years.

Promotion to The National League, the fifth league in English football, will see Maidstone join fellow Kent club Dover Athletic FC playing teams from across England.  This higher profile for the club will help bring in larger crowds and maintain local interest in the club.

Gullands’ Practice Manager Paul Mannering comments: “This is once again a fantastic result for the team who have worked hard all season and it is also great for the Stones fans who turn out each week to support them.  Moving the club back into the heart of  Maidstone has been a great way to keep interest and to attract new supporters.  With its friendly feel, a visit to the Gallagher Stadium is a great day out for football fans of all ages.”

Gullands sponsors the Gullands Lounge, the team shorts and has a number of signs up around the club. Paul Mannering continues: “We are a Maidstone business through and through and we have been here in the town centre for over 100 years.  We strongly believe in supporting the high street and the local business community and Maidstone United helps bring together both the local business community and fans as well.  We look forward to the start of the 2022/23 season and hope the team can continue to go from strength to strength.”

Thank you for your advice and support on this matter, I am clear I would not have had as positive and as fair a result otherwise. Thank you for recommending Mr Snow ( counsel) as well. His expertise at the hearing really counted.