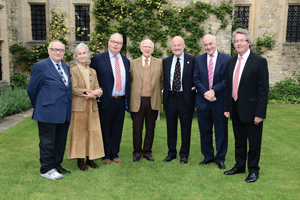 Earlier this year, Gullands Solicitors and 6 Pump Court jointly hosted The Allington Debate at Allington Castle, the lovely and historic home of Sir Robert and Lady Worcester.  Members of the House of Lords and the legal profession joined members of the business and rural community in Kent to hear a debate on whether Britain should remain a member of the European Union.  This will no doubt be a debate that will be repeated around the dinner tables of Kent over the coming months as the referendum gathers pace.

The motion ‘This castle believes that Britain’s national interests unequivocally lie in our remaining a member of the European Union’.  Lord Howard of Lympne, the former leader of the Conservative party and Lord Liddle, former special adviser on Europe to Tony Blair, set out their arguments.

Also on display for the evening was the Faversham copy of Magna Carta, celebrating its 800th anniversary this year.  The Faversham Magna Carta has been in the town since 1300 and is the last reissue of King Edward I’s seal.  It was presented to the Barons of the Port of Faversham due to the town’s connections with the Cinque Ports, which were given special status for their role in defending the country’s coast from invasion.  Only six 1300 Magna Carta documents survive and the other five can be found in Oriel College, Oxford, The Bodleian Library, Durham Cathedral, Westminster Abbey, and the City of London.

View the Allington Debate on Gullands’ You Tube Channel