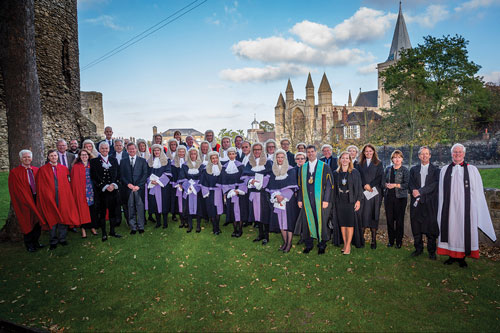 Last year we co hosted an evening at Allington Castle, where fellow professionals and the judiciary gathered to hear a debate on the forthcoming EU Referendum.  We were delighted that we were able to borrow for the evening the Faversham copy of Magna Carta, the text which our modern laws are based on.

When I recently attended the annual Justice Service at Rochester Cathedral, I was reminded that here in Kent, there is a legal document which predates King John’s Magna Carta by around 100 years. The Textus de Ecclesia Roffensi per Ernulphum episcopum (The Book of the Church of Rochester through Bishop Ernulf), usually referred to as the Textus Roffensis is a collection of documents that includes the Law of Aethelberht. This is attributed to Aethelberht of Kent, King of Kent from 560 or later to his death on February 24, 616, and the first Anglo-Saxon king to convert
to Christianity.

Blair Gulland can be contacted at b.gulland@gullands.com