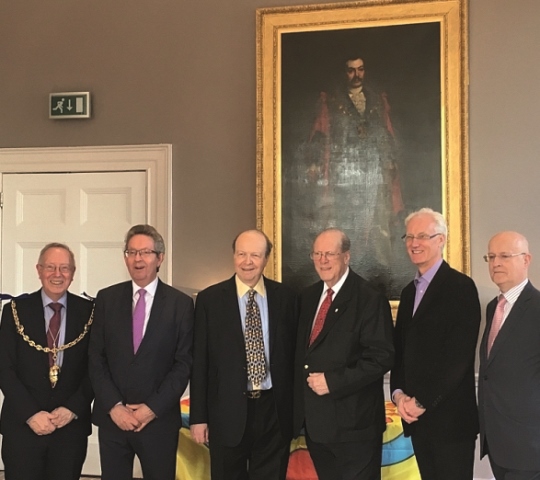 Blair Gulland, Chairman of Gullands Solicitors has helped to ensure the return of a very important painting of Viscount Bearsted to Mote Park, Maidstone in his role as Trustee of the Maidstone Trust.

Marcus Samuel, Viscount Bearsted was a very important name in British Commerce during the latter part of the 19th Century and owned Mote House and Mote Park in Maidstone as his country seat.

Recognising the importance of oil in the world of industry and transportation, he founded the Shell Transport and Trading Company and built the first fleet of bulk oil carriers. They were the first to use the Suez Canal.

His enterprise, fame and fortune was matched by his generosity and he is remembered in Maidstone today in the Bearsted Gallery at the Maidstone Museum, which he paid for in 1923. He is also remembered for the large and valuable collection of Japanese art, ceramics and other important artefacts, which today form one of the most important collections in the United Kingdom outside the Victoria and Albert Museum. These were assembled by Walter, Marcus’s son who was sent to Japan to deal with the Far Eastern arm of the Shell Enterprise.

The portrait of this great man was discovered in the store at the Maidstone Museum in a rather sorry state and it has now been fully restored by funds raised through the Maidstone Trust. This portrait shows Sir Marcus (as he then was) in his robes as Lord Mayor of London in 1902 and is unique. Sir Marcus was made an Honorary Freeman of Maidstone in 1903. His Company became merged with the Royal Dutch Oil Company and Royal Dutch Shell became a world leader in oil production. Shell Oil still proudly has its logo of the Pecten scallop which has been its trademark since 1904 and brings remembrance of the trade in shells which the Samuel family ran in London in earlier days.

Having been knighted in 1898, Marcus Samuel became the first Viscount Bearsted in 1921. The painting has now returned to Mote House and was unveiled in the Romney restaurant on February 18th. 2017 by Lord Bearsted’s Great-Grandson Nicholas, the 5th Lord Bearsted.

This homecoming was facilitated by kind permission of Audley Homes who now have taken over and renovated this magnificent mansion in Mote Park along with the retirement village. Blair Gulland comments: “It has been a pleasure to be involved with the fantastic project to secure the return of this very important painting of one of Maidstone’s most successful businessmen to its rightful home. I would urge anyone who is interested in a significant part of our Maidstone Heritage to visit Mote House to view this large and impressive portrait.”