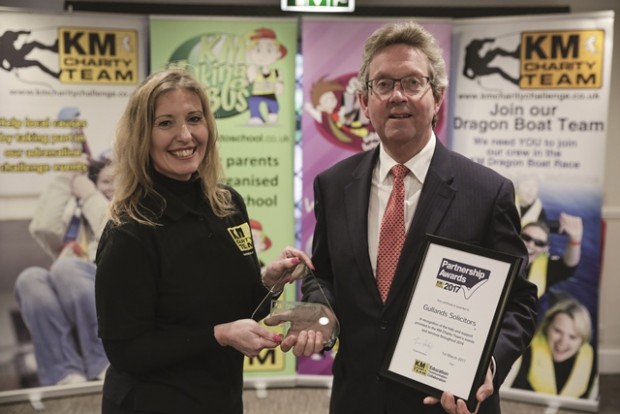 Gullands Solicitors has received an award at a ceremony staged to thank local organisations who have teamed up with a leading educational charity, which aims to make Kent a better place to live
and work.

Fifty organisations that are critical partners of the KM Charity Team in delivering its charity fundraising and educational events and services were honoured at the KM Charity Partnership Awards in March.

The charity stages collaborative fundraising events including the KM Big Bike Ride,
KM Colour Run, KM Charity Walk and KM Dragon Boat Race as well as multiple heats
of the KM Big Charity Quiz around the county, all raising £200,000 for a host of local good causes.

Many of the partners help the charity with its educational work which includes removing more than 250,000 school-run car journeys from Kent roads each year, through its walk to school campaign. Children taking part in the charity’s Buster’s Book Club initiative collectively read more than two million minutes at home last academic year.

Representatives from businesses that had supported the charity’s work past and present received a KM Charity Team Partnership Award trophy and framed certificate.

Viscount De L’lsle Lord Lieutenant praised the charity; “The winners help this charity do a great job. The whole idea of getting local government, the private sector, and charities together is a real team approach. Some initiatives like the Walking Bus scheme is a demonstration of good practice and has been taken up all over the country.”

Blair Gulland, Chairman of Gullands Solicitors attended the awards and comments:
“We are once again proud to have teamed up with the KM Charity Team this year and it is a great honour to receive this award from them. The Gullands team works hard to support a number of local charities each year.”