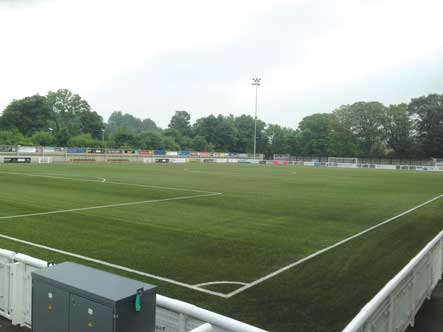 The recent off pitch victory for Maidstone United in the long-running battle over its 3G pitch with The Football Conference is a decision for ‘common sense’ according to the club’s co-owner Oliver Ash.

Whilst the future now looks rosy for the club, the past 12 months has seen Maidstone United fighting against old-fashioned attitudes that are holding the sport and smaller football clubs back.

Gullands is delighted to have been a part of the team advising the club’s owners, and Mr Ash explains why this was one fight they had to win.

The story begins back in 2010 when the club ran into financial difficulties.  A new financial plan was implemented, which relies on the club being able to operate seven days a week throughout the year.

Land at the Gallagher Stadium is limited, so to have one pitch in continuous use meant that a 3G artificial one made the most sense.  Its installation, however, created a dilemma for the club.  If the club were promoted, it wouldn’t be able to use its 3G pitch, as archaic rules do not allow them to be used in The Football Conference.

“A 3G pitch is a really important part of our business model as it has allowed us to create many additional business and revenue generating activities,” says Oliver Ash.

“The pitch will be used for matches and training by the club, by our Academy students, hired out to community teams, and many corporate and private events.

“We have the clubhouse and bar, which is open daily and can be hired for larger events, and the luxurious Gullands Lounge has just been extended, and can be used for smaller meetings and events. “Most stadiums are dead throughout the week and out of season, yet we put ours to good use throughout the year.

“We realised the issue over the pitch had to be addressed in case we were in a position to be promoted,” adds Ash, “so we took legal advice from Gullands who also put us in touch with a specialist sports barrister.

“We lobbied The FA ceaselessly and despite a significant PR campaign and supportive articles in several national newspapers, we were in danger of not being allowed to play in the end of season play offs.

“The FA took up the case in March and there was not one single factual argument presented by The Football Conference against 3G pitches.
It was all emotion and prejudice on their side.  Thankfully good sense prevailed and the FA announced that 3G pitches would be allowed in all
its competitions at every level.”

Ash concludes: “I would like to thank Gullands and in particular Blair Gulland for their advice and support during this very challenging period.”

Blair Gulland, chairman of Gullands Solicitors said: “This was a situation which required only one possible outcome to help the club to succeed and we are delighted to have been part of the team which has helped it to achieve this successful outcome.  Maidstone United is really a template
for how other smaller clubs can succeed financially and also has re-established itself as a central part of the Maidstone community.”

If you would like to find out more about pitch and venue hire, the Academy or for any other information go to www.maidstoneunited.co.uk