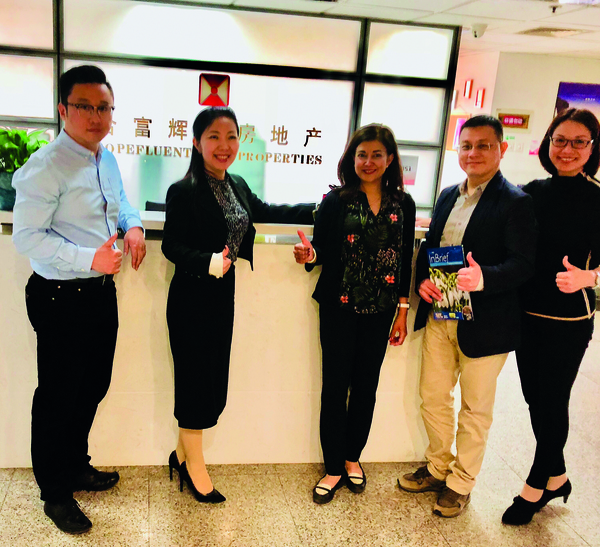 Associate Marianne Webb reports on her recent trip to visit a new client.

In early spring, I was fortunate enough to make a trip to China first landing in Chengdu to visit my daughter who is studying at the Sichuan University there. Famous for its panda bear conservation centres, Chengdu is located in western China and has a population of 14 million people. Not wishing to miss out on one of the wonders of the world we took the 3-hour flight up to Beijing to trek the Great Wall of China. It was the most awe inspiring almost surreal experience and one I would wholeheartedly recommend for your bucket list.

We would see the panda bears up close and personal later in Chengdu but in between the Great Wall and the panda bears, I was delighted to accept an invitation to visit Hopefluent Group Holdings Ltd, a real estate company well known in China and listed on the Hong Kong stock exchange. Its northern branch is based in a city known as Tianjin located some 70 miles south of Beijing, yet only 22 minutes by bullet train travelling at speeds of up to 217 mph. They boast that even at those speeds the ride is so smooth that not a drop of water spills from a full glass balanced on your tray table. Amazingly true.

Beijing has a population of 22 million as compared to the smaller town of Tianjin with only 13.5 million!

The purpose of the visit was to meet with Hopefluent Tianjin in promoting Chinese investment in the UK property market. The office was busy and bustling and I had the pleasure of meeting the CEO, Mr Da-Hui (David) Ouyang and the whole team appeared quite impressed that I had made the trip specially to see them. I felt very welcome. The hospitality was second to none.

The Group company was founded in 1995 and in 2004; it became the first publicly listed property company in mainland China. Today it has 23,000 employees and more than 70 subsidiary companies in cities including Australia, Malaysia and Macau. They carry out more than 1,100 projects a year and the annual turnover is in the region of 300 - 400 billion Yuan (approximately £30b - £40b). It is now in the top three real estate companies in China.

Mr Ouyang set up the Tianjin office in 2002.  Hopefluent is involved in all aspects of real property from finding and investigating sites to planning, designing and development of the sites, offering financial services, online advertising, disposal and management of the properties.

We look forward to working with them on their projects here in the UK.