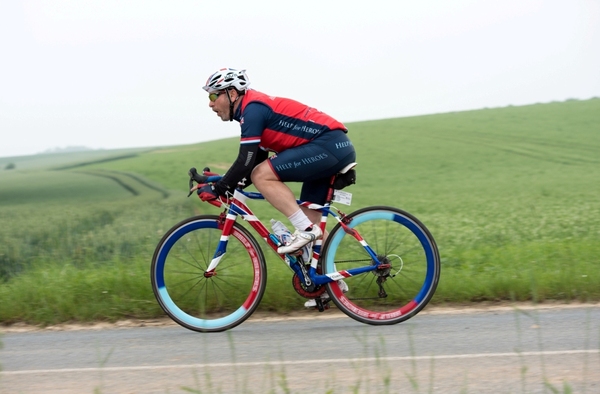 Cycle4Heroes returns to Medway and North Kent on Armed Forces Day, Saturday 25th June 2022 with a new 75km route to raise funds for Help for Heroes.

Sponsored by Gullands Solicitors and organised by Steve Craddock MBE, the cycle ride starts at the Royal Engineers Museum Chatham at 9am, then it will head out along the coast towards Faversham and return via the North Kent Downs.

Riders aged 16 upwards can now register and the entry fee is £30 and they are also asked to raise an additional £50 sponsorship. Corporate teams are also welcome to join in with a fee of £300 for up to six riders. There is also the chance for the highest individual fundraisers to win either a £700 credit to spend on cycling equipment curtesy of The Bike Warehouse, Gillingham or a comprehensive bike fit out worth £350 from Ben-efit Bikefit Studio.

Steve Craddock comments: “We are delighted to be back after a two year break due to Covid and we are pleased to have new sponsors on board to support us and help us raise vital funds for Help for Heroes. This is a cycle ride where no one gets left behind, we support everyone and make sure everyone gets around the route and finishes with a smile on their face. We are once again finishing late afternoon as part of the Armed Forces Day celebrations in Great Lines Park, Chatham.”

“I would urge anyone who likes to cycle or is new to cycling to come along and join in to help raise much needed funds for our wounded soldiers – those with physical ailments and/or mental scars from their service. Every single penny raised from this event goes to Help for Heroes.”

John Roberts, Managing Partner at Gullands Solicitors comments: “ We are very pleased to be supporting Steve and the Cycle4Heroes ride, it is a great event and brings together the cycling community – from amateurs to more experienced riders and those with disabilities both physical or hidden. This is a great ride for anyone new to cycling, especially those who have started over the last couple of years. Come along and experience the thrill of riding on some of the most picturesque parts of Medway and Kent.”

To register for the ride or for more details visit www.cycle4heroes.com

Steve Craddock is a former Sergeant in the Royal Engineers from Chatham who was awarded an MBE in the Queen’s birthday honours for services to fundraising in 2021. Steve has personally raised over £500,000 for Help for Heroes since the charity was launched.

Steve himself suffered Post Traumatic Stress Disorder as a result of his own military service and he credits Help for Heroes in helping him and his family on his ongoing journey of recovery. Steve signed up to the army age 17 straight from school and left behind family and friends in the North East. He served in the Royal Engineers for a number of years including several tours of Northern Ireland during the height of the troubles.

Over the years Steve has organised and raised money at a variety of events which have filled football stadiums, fed hundreds of people through curry nights, hosted talks and pub quizzes but his greatest passion is for cycling. With his motto ‘no one is left behind’ he has organised and participated in many events each year including cycling the length of the UK from John O’Groats to Land’s End.

Steve’s inspirational fundraising rides have brought together amateurs, ex-service personnel, keen cyclists and sports stars such as Dame Kelly Holmes to share the joy of riding and to help make a long-term difference to the physical and mental wellbeing of all of those taking part.

With his first-hand experience of the wellbeing benefits of cycling, Steve is also keen to inspire other veterans to get on a bike as he knows how enjoyable and freeing it is, and how much it can significantly reduce feelings of anxiety. To this end he has set up his own cycling group called ‘No One Left Behind’ which encourages veterans of all sexes to join with other likeminded people, get out on their bikes and know that the ride will always be at the speed of the slowest person.