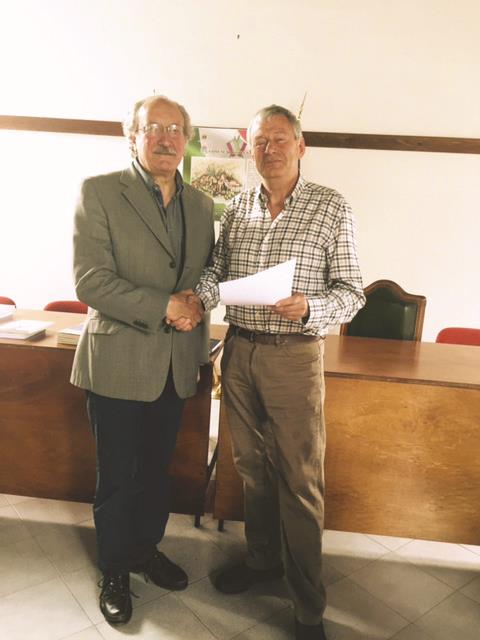 Gullands’ Criminal Solicitor Patrick Bligh, has recently turned detective as he embarked on a journey which took him to Italy to retrace his father’s World War Two experience.

Patrick’s father, Ken Bligh, was a Lieutenant in the Royal Engineers fighting in North Africa when he was captured and became a prisoner of war, held in PG 49 Fontanellato for nearly two years. In September 1943, Ken escaped and walked nearly 400-miles before reaching allied lines in May 1944.

In the Spring of 2016, Patrick and his wife Liz followed some of his father’s route, visiting Castel San Angelo where Ken had taken refuge over the harsh winter of 1942/43.

Patrick was able to trace his father’s journey with the help of Monte San Martino Trust, (MSMT) an organisation that offers bursaries to the descendants of the Italian people who risked their lives to help escaping prisoners.

Patrick and Liz finished their journey by walking in the Tenna Valley with a group of other descendants of escaped prisoners to raise money for MSMT.

Speaking on the experience, Patrick said: “I’m very thankful for the help I’ve received from MSMT. The work they do is brilliant. We had a great time retracing my father’s footsteps through Italy, and I like to think that the Italian people who helped my father were as generous and welcoming as those I met on my visit.”

You can find out more about the MSMT on its website:
http://www.msmtrust.org.uk/