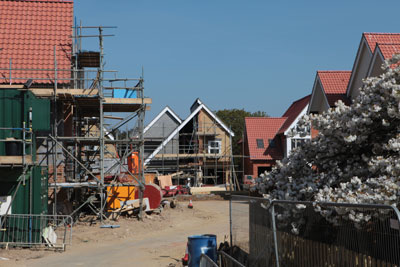 Latest industry forecasts predict that construction output will rise by 3.4% in 2014 and by a further 5.2% in 2015. The Construction Products Association’s (CPA) figures also project growth to continue throughout the forecast period to 2017 with a 4.4% growth in 2016 and 3.8% in 2017. However, CPA said that “considerable uncertainties remain” about the sustainability of recovery in the industry and wider economy beyond 2015.

CPA economics Director Dr Noble Francis said: “The construction industry is in a very different place to just one year earlier when output fell to a level 15.4% below its pre-recession peak.  Since the first quarter of 2013, activity has picked up considerably.  Initially this was due to a rapid expansion in house building but more recently growth in new infrastructure and a recovery in London commercial activity have supplemented a further rise in private housing”. Dr Francis went on to add that “Housing starts in Great Britain during 2013 are estimated to have increased 24% and further growth rates of 16% in 2014 and 10% in 2015 are forecast”. Dr Francis continues “in the second half of 2013 the infrastructure sector was a key driver in construction growth, with output in the sector forecast to increase 39.7% by 2017.  This growth is primarily expected from a recovery in the roads sub-sector, where output fell by 50% in the space of two years, combined with further growth in rail construction”.

The largest constraint to industry recovery was regarded by Dr Francis to be public sector construction.

At the Kent Construction Focus Group (kcfg) breakfast meeting in January 2014, a survey was taken in order to provide a market indicator. This showed that 62% of attendees thought that the level of client tender enquiries in the private sector was rising, with 52% in the public sector. The level of newly secured projects in the private sector was thought to be increasing by 68% of people and by 51% in the public sector. These figures seem to bear out the conclusion of the CPA