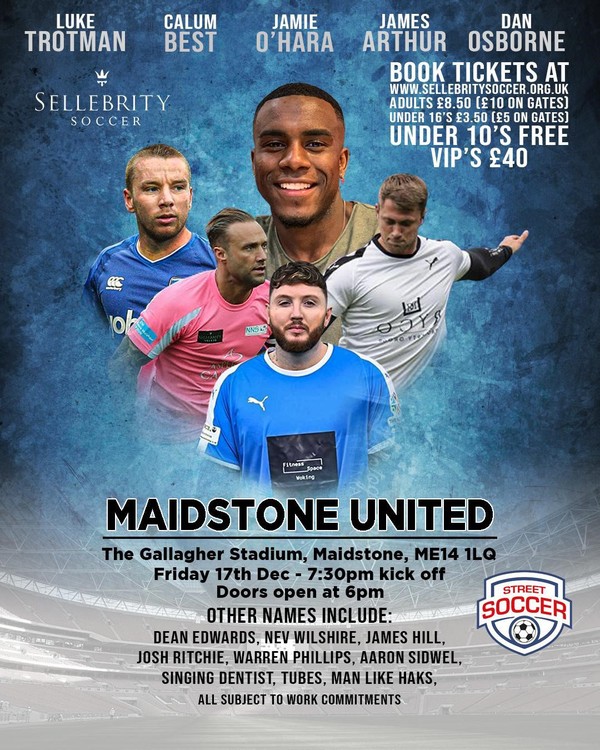 A number of well-known personalities will be taking part in a charity football game at the Gallagher Stadium on Friday 17th December to help improve the lives of vulnerable and homeless young people across the country.

The celebrities will support the Street Soccer Foundation, a sport-for-change charity, formed and based in Kent, by showing off their skills in a charity football match at Maidstone United FC’s Stadium and we are delighted to be supporting them.

Founder and CEO of the Street Soccer Foundation, Keith Mabbutt, said: “It’s great that these celebrities are supporting our charity and work that helps communities nationwide and makes a real difference in young people’s lives across England.

The aim of our foundation is to use football as a catalyst to help improve lives by educating, motivating, and supporting homeless and vulnerable young people, and monies raised from this event will be vital in our continued endeavours throughout the country.”

The match has been organised by Sellebrity Soccer, which was launched in 2012 to help charities raise money by arranging all-star football matches across the UK.

“Since launching, the continued support has helped us raise an outstanding total of £2,124,189 and this number will only continue to grow.”

Kick-off will be at 7.30pm on Friday 17th December, but fans can enjoy the atmosphere inside the stadium from 6pm.