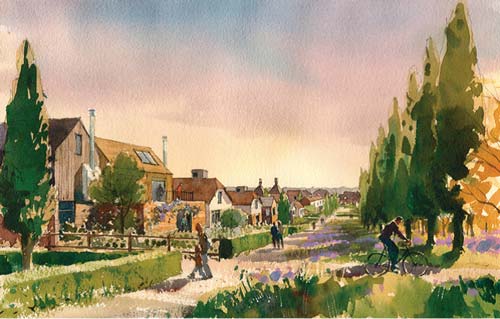 In April this year Golding Homes’ Director of Regeneration and Development, Chris Blundell, was shortlisted for the prestigious Wolfson Economics Prize for his response to the question on ‘How would you deliver a new garden city which is visionary, economically viable, and popular?’

His essay draws upon Golding Homes’ plans for a garden suburb to the South East of Maidstone and follows closely the announcement of a new garden city at Ebbsfleet.

To celebrate and explore the potential benefits of a garden city, Gullands will be hosting a special seminar for business leaders on 9 October at Maidstone United Football Club from 8am till 10.30am.

Garden Cities and meeting local housing demand – the benefits for the wider business community will explore the economic opportunities a garden city could bring for local business and the construction sector in and around Maidstone.

Hosted by Blair Gulland, the seminar will provide our guest speaker Chris Blundell the opportunity to share his vision.

According to a national poll commissioned by the Wolfson Economics Prize:

•  68% of Kent’s residents agree that there is a serious shortage of good housing in Britain;

•  Over two thirds consider garden cities to be the best way to deliver new housing, as well as protecting the countryside from development.

Garden cities could not only help solve Britain’s housing crisis, they could also deliver better homes, gardens, public spaces, schools, hospitals, infrastructure, jobs and economic growth. With the go ahead granted for the Ebbsfleet’s garden city, it is perhaps only a matter of time before plans for Maidstone’s garden suburb are approved.

There are limited places available for this seminar, which will include a light breakfast. To book your place now, please email e.smith@gullands.com