Brexit, next steps for South East's farmers and landowners? 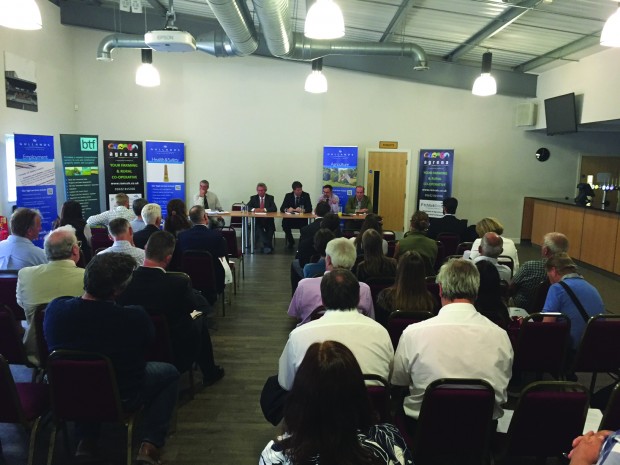 Gullands Solicitors teamed up with Agrena Ramsak on the eve of the Kent Show, (Thursday 7 July), to host an information evening for farmers and landowners following on from the vote to leave the EU. Farmers and industry leaders gathered at the Gallagher Stadium, Maidstone to hear the latest thoughts from a panel of experts, who also answered questions on the immediate and longer term impact of the vote.

The general consensus of the panel was that there was likely to be massive uncertainty over the summer for farmers. They should however be reassured that they collectively are all working towards having a number of options in place to present to Government by the end of July and that considerable lobbying both here in the UK and in Europe was taking place. They were all keen to point out that the current CAP rules still apply and a business as usual approach should be taken. They were hoping the decision will be made to delay leaving the EU to coincide with the current payment scheme which ends in December 2020.

James Gray from the TFA highlighted the need for a review of the arrangements for tenant farmers to ensure future support provides them with a reasonable standard of living. He thought there would be less impact for tenant farmers in the longer term as their rents should come down. Hill farmers are likely to get a greater share of future financial support for the industry, because of the impact on tourism and other sectors of the UK economy.

Tom French highlighted it may be beneficial for tenant farmers to consider carefully their position in approaching forthcoming rent reviews over the next couple of years. Landlords may decide to postpone them, but it could be in the interest of the farmer to serve notice to enable them to negotiate in a better position. All agreed those farmers with mortgages are more likely to be affected by the vote in the longer term.

William White from NFU highlighted that delaying triggering Article 50 may actually make trade negotiations more difficult in the longer term. Robin Edwards agreed that this may make those leading the negotiations more hostile towards the UK, which could result in a worse deal.

Members of the audience including Sarah Calcutt, Chair of the National Fruit Show highlighted one of the greatest concerns, especially for horticulture is the sourcing of seasonal labour. There are also reports of many overseas workers feeling upset by the vote, enough so that some employers had written to all their staff to reassure them of their short term future and value to their business.

One of the greatest threats highlighted is future food supply and food security. The panel agreed that farming as an industry needs to put forward a better case for maximising UK production and that it should be supported by retailers by switching away from cheaper imports.

Blair Gulland comments: “We were delighted to host a really interesting evening and to hear the latest news from those in the industry representing farmers and landowners. These are likely to be challenging times, but there is a lot that farm businesses can do now to ensure they are fully prepared for the UK leaving the EU. At Gullands, we will be happy to advise on the legal aspects of any contractual arrangements farmers currently have in place that could be affected as Brexit moves closer.”