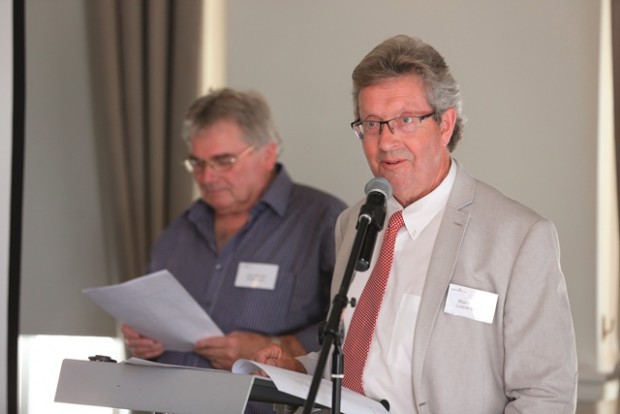 Blair Gulland, Chairman of Gullands and Trustee of Golding Homes led tributes at a gathering earlier this summer to mark the retirement of Peter Stringer, The chief executive of Kent based housing association Golding Homes.

Peter Stringer retires on 30 September 2017 and has been chief executive of Golding Homes since it was created in 2003, when he successfully led and managed the transfer of over 6,000 homes from Maidstone Borough Council.

During Peter’s time as chief executive, Golding Homes has grown from strength to strength to become a well-respected local employer and award-winning landlord of over 7,200 homes. It now boasts a first-class reputation gained through the completion of over 1,200 new properties, providing homes for over 10,000 people in seven local authority areas. It has also invested over £150m in large scale regeneration projects, as well as supporting its residents through a £3m community investment programme.

After completing a degree in Town Planning at the University of Birmingham, Peter began his housing career in 1980 as a Housing Assistant at Warrington Borough Council and moved to Kent in 1986 to become the Assistant Housing Director at Maidstone Borough Council. He has held several non-executive housing association roles as a board member at Sanctuary, Horizon and Mole Valley Housing Associations, the National Housing Federation and Executive member of the Kent Housing Group.

Speaking about his career with Golding Homes and forthcoming retirement Peter said:

“It has been a hugely rewarding experience to establish and lead Golding Homes over the last 14 years and a pleasure to work alongside so many talented and dedicated people who are committed to making a difference to the lives of our customers and communities. Golding is in my blood and I am sad to be leaving, but I feel now is the right time to retire and look forward to spending more time travelling with my family and on the golf course.”

“We owe Peter a huge amount of gratitude for the work he has achieved. Under Peter’s leadership Golding Homes has grown to become one of the leading housing providers in Kent, with an excellent reputation as a social landlord and developer of high quality affordable homes. Peter has a wealth of expertise and experience and is well respected within the housing sector for his values and ambition to make a real difference to our communities and the lives of our residents, which is a hallmark of his distinguished career.

He will be leaving the organisation in an excellent position to grow further and meet the challenges of the future, and although we are sad to be losing Peter his legacy will continue for many years.”

Gary Clark will be appointed as the new Chief Executive for Golding Homes.

Currently Operations Director at mhs homes Gary brings over 18 years experience in the housing sector to this role, having held senior management and Director positions in a number of housing associations including Moat, Peabody and Rosebery Housing Association.

Speaking about his appointment, Gary said:

“I’m so proud to have been part of mhs homes for the last four years and for the great strides we have made. Now looking to the future, I am really excited to be joining Golding Homes as its new Chief Executive and look forward to some exciting new opportunities and challenges ahead.”

“I have enjoyed working with Peter for a number of years and wish him a relaxing and enjoyable retirement. He has played a major role in the local housing market and helped shape housing policy locally, providing affordable homes for thousands of families.”

Blair Gulland became involved with Golding homes in the early 1990’s when he was the Chairman elect of Hazlitt Housing Association, which was due to take over all of Maidstone Borough Council’s housing stock. The vote was unfortunately lost, but Blair became re-engaged with the process about ten years later and the vote to transfer them was eventually won. He was centrally involved in the transfer and the rebranding of the organisation from Maidstone Housing Trust to Golding Homes. Blair was also a main board member of Golding Homes for nine years.

Blair has been involved in a number of projects with Peter and Golding Homes including the ground breaking joint venture scheme when Golding built 20 flats in Church Street, Maidstone and sold six of them to Cutbush Almshouse Charity, where he was the clerk.

He also helped to facilitate the agreement with Golding Homes and the YMCA, which culminated in the new community centre being built in Tovil.

Blair Gulland can be reached at b.gulland@gullands.com