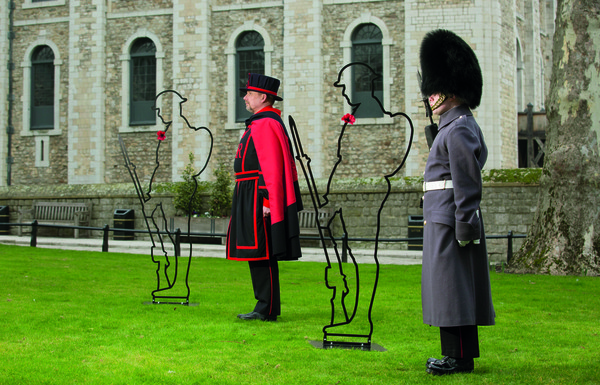 2018 sees the 100th anniversary of the Armistice and the end of WW1 and an art project which began in a Kent church will be seen nationally across the country as part of the remembrance activities.

St John the Baptist church at Penshurst in 2016 was the first to host an art installation There But Not There www.therebutnotthere.org.uk which saw 51 clear silhouettes placed on the church pews to remember the fallen men of the parish.

Remembered is a new charity inspired by the enormous impact of this installation and will work to raise funds in this centenary year alongside Royal British Legion Industries (RBLI).

Launched 28 February, silhouettes of soldiers will be appearing around the country until November 2018. In 2014, the installation of poppies at the Tower of London to commemorate the start of WW1 attracted millions of visitors and created a significant impact.

Blair Gulland Chairman of Gullands and a Trustee of RBLI comments: “This is a very moving and fitting tribute to our fallen WW1 heroes which will also help to raise much needed funds for the former service personnel who are living daily with the lasting legacy of their active service. As a trustee of RBLI, I am very honoured to be involved with the organisation, especially in this centenary year.”

RBLI supports this project and is producing smaller model ‘Tommies’ through its social enterprise Britain’s Bravest manufacturing company, which employs more than 100 people, 70% of who are either ex-service personnel, have a mental disability or both.

Blair Gulland concludes: “Gullands is a firm with a history stretching back over 100 years in Maidstone and there will have been many clients and staff of the original firm who would have been greatly affected by the war and we will endeavour to remember them all in this important centenary year.”